skip to main | skip to sidebar


A week and a half ago we wrote about Painter, the interactive video program we used in the dance Red Bites for a Rainy Day and are now turning into an interactive installation. We've decided to call the installation Canvas. Yes, it's not very poetic. It doesn't matter, we're modernists. Form equals function and all that.

Canvas has a sonic counterpart called Triggers and together they make up our audio-visual installation Canvas + Triggers which we'll be presenting next month at the Abundance Dance and Choreography Festival in Sweden. But we'll come back to this at a later time.

Last weekend Canvas was installed in Ithaca, New York, and on Thursday, June 3, it will appear at Southbank Centre in London.

You can learn pretty much everything you need to know about Canvas + Triggers--and see some film footage of Canvas--at the web page we've devoted to them. And you can learn something about what will happen in London from our blog post at dance-tech.net.

What we want to talk about here is what we learned from Canvas's debut in Ithaca.

Well, to start with, many passers-by didn't even notice it. In this case it was projecting about twelve feet off the ground, well above people's heads, and many went by without looking up.

If someone did look up, they might get the sense that something colorful was happening that was connected to them walking by, but what exactly it was might not be readily apparent. This is okay too.

The next stage was standing there trying to figure out what was going on. In this particular lobby the projection was set up on a wall perpendicular to the camera's horizontal direction, so in order to make the painting go left and right the observer had to move towards and away from the projections. This takes a little while to get one's head around.

Finally, the camera was looking down on the observer at an angle of 45-60 degrees, so one had to play with the projection by considering what one looked like from above, another tricky thing to envision. But it contributed to engaging the audience.

At this point one could proceed with experimenting with movement or not, and our video certainly shows those who did. But even without moving, loiterers noticed this big, bright, colorful stuff happening on what was normally a blank white wall, and the effect was of an added sense of liveliness and fun inhabiting the lobby.

A couple technical adjustments proved helpful. If the paint fades too quickly the effect becomes somewhat ghostly and there's no chance for accumulation, so the default lower limit of the fade time range has been increased to 16 seconds (with a default upper limit of 400 seconds). It also seems fine to let the screen go blank when there is no movement as it then becomes more of a surprise when someone new walks across the camera's frame of vision. Alternatively we could let the screen always show a hint of collected color, but that slows down the frame rate. So going completely blank makes sense.

We're now taking a tested product to Queen Elizabeth Hall. The big question will be whether or not we can find an equally effective setup configuration, particularly with regard to projecting on a large white surface and avoiding silhouettes. Stay tuned! Or better yet, check it out on 3 June!


Posted by Sebastian at 6:02 PM No comments:

Four review articles on the state of dance today:


Posted by Sebastian at 5:37 PM No comments:

A year and a half ago Armadillo Dance Project started working with what we have tended to call the painting patch because of its effect being similar to creating an abstract expressionist painting. First used publicly at the February 2009 Phoenix Experimental Arts Festival in our piece Red Bites for a Rainy Day, the painting patch is a Max 5 software program that uses a video camera to target either (a) a previously set color or (b) any movement. In each frame of video the target pixels are painted a new color, which changes gradually from frame to frame in a random walk through the video color cube, and the paint accumulates on the screen. A separate parameter controls how quickly the paint fades (to either black or white); if the target color is not present, or if there is no movement, the canvas will gradually go blank. Our best video of the program in action comes from the performance of Red Bites at the Cloud Dance Festival: Restless in April 2009 in London.

We now have a series of events scheduled that will place the painting patch (now simply called Painter) in public spaces as part of interactive installations. It will be set up in the lobby of the Schwartz Center at Cornell University in Ithaca, New York, on May 6 and 8 during performances of the semester-ending Dance Theatre Concert (this semester called the Locally Grown Dance Festival). It will similarly be installed in the foyer of Queen Elizabeth Hall at Southbank Centre in London during a performance by the London Sinfonietta on June 3; that concert will be presented with concurrent events organized by The London Sinfonietta Collective and promoted jointly as Shadoworks.

We'll next take Painter to Sweden where we'll be presenting an installation / lecture-demonstration during the Abundance Dance and Choreography Festival in Karlstad, June 15-17. Painter will be part of a multimedia installation of several of our previously used interactive programs combined to create an environment responding to movement. The first two days we'll be set up in the Värmlands Museum, where we'll give the lecture-demonstration on Choreographing with Computer Interactivity at 3 p.m. on June 16. For the last day plans are being formulated to move us to Karlstad University where the World Summit on Media for Children and Youth is taking place and set up somewhere there. We'll update our website when the details are worked out.

Posted by Sebastian at 5:18 PM No comments:

ADP will be performing on April 26 at the Cloud Dance Festival.

Hope to see you there!
Posted by Sebastian at 6:39 AM No comments:

Last Friday, February 6th, ADP had the pleasure of performing for the second year in a row at the Phoenix Experimental Arts Festival. It was the premiere performance of Red Bites for a Rainy Day--our first foray into the world of interactive projections. 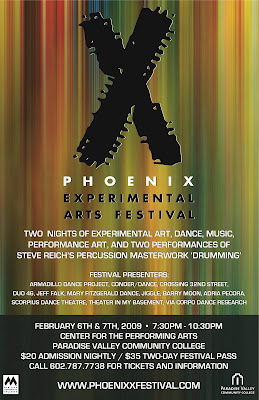 Yes, we admit, it was almost insane to travel from New York and London to perform for one night at a relatively small local festival in Phoenix, Arizona. But boy was it worth it! We got a whole week's worth of time, space, and technical resources to finish what we'd been gradually piecing together for the past 4 months or so. Quite the royal treatment!

It was a crazy week--we blew up about 400 white balloons in order to make a kind of textured projection screen out of them. It could have been disasterous--in fact, it almost WAS disasterous. It's incredible how dry and peeled your fingers can get after two days of tying latex knots! But we made it work. It was a good thing too--because it is highly unlikely that we will ever be able to do this again! After four days in the theatre blowing, popping, tying, and lugging balloons 15 at a time in a little wagon and shopping cart (quite funny, really!), we ended up with something like this: 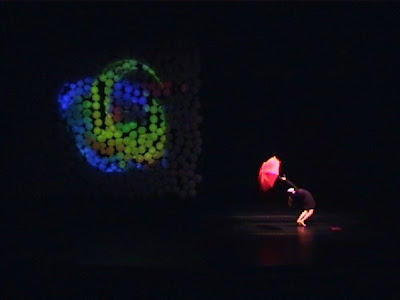 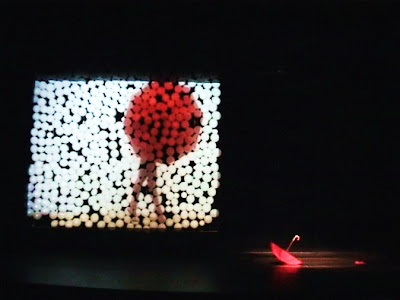 Posted by Sebastian at 1:39 PM No comments:

Red Bites for a Rainy Day

ADP is currently working on a piece which uses colour tracking to generate real-time digital paintings. Essentially, anything red becomes a kind of paintbrush. These “paintings” will be projected on some sort of surface during the performance and occasionally interrupted by short interludes of pre-recorded film. See video samples below...it's kind of fun to try to watch them simultaneously.

Posted by Sebastian at 5:04 PM No comments:

Here at Sebastian's Corner I'm going to try to write somewhat intelligently about that which interests me: dance, music, interactivity, perception, aesthetics, and other whimsical subjects. Obviously this first post is about nothing at all, as all I'd like to do is see how everything is working, but with time I hope to have more content. Thank you, all of you, and for now, goodbye!
Posted by Sebastian at 10:01 AM No comments: